Well, I can't believe how quickly the time is going here. I am into my sixth week at this house sit and thoroughly enjoying the rhythm of life in this area. The walking is absolutely wonderful and I am doing at least three hours every day and feeling great. Forget sculpting and toning machines, I've dropped a jeans size, my bum has lifted and my thighs are like metal rods and all this for free! Am I low maintenance or what?
The weather has been incredibly changeable going from minus to double figures in a matter of hours so that I have sometimes gone out in several layers only to have to peel them off to a short sleeved t-shirt before I got back. There have been some big snow dumps in both the North and South Islands and some of the peaks have been closed for periods due to the risk of avalanche but, although we have had our days of heavy rain, we do seem to enjoy a bit of a micro climate in this area. On the whole it has been less cold than I had expected for winter in NZ but there have been times when I have been extremely grateful for the loan of an electric blanket and when getting out of bed for the loo in the night has been painful.
One of the well known walks in the area is the Boulder Bank Scenic Reserve that separates Nelson Haven from the Tasman Sea. It is a 13km long natural land form created by the process of longshore drift and is very real exercise for the ankles because it is exactly what it says it is. 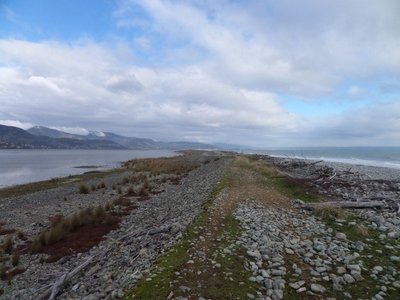 The views back across the Haven to Atawhai (where I am staying) and Nelson make it worth the effort but I wouldn't want to do it twice.
I drove out to Cable Bay, a small community 18kms North East of Nelson, which was so named because this was the place where the first cable came ashore from Sydney connecting NZ to the rest of the world. There is a causeway to Pepin Island, privately owned and opened for one day a year to walkers to raise funds for the Hira Volunteer Rural Fire Force, and spectacular views up the Wakapuaka Estuary. 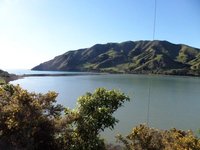 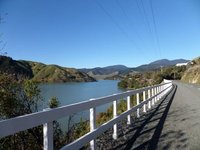 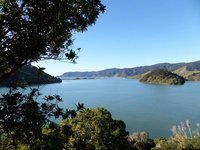 37kms South West of Nelson is Mapua with a thriving wharf area and offering a sheltered bay between it and Rabbit Island. 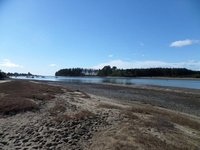 In the 20th century Mapua was one of the most contaminated sites in NZ due to pesticide residues in the soil from a, now defunct, factory. In 2001 the local government authorised a massive clean up operation and in 2007 the company responsible for doing this finally handed it back to the local authority. Apparently in 2012 several cases of ill health were reported in workers occupied in this clean up and I don't know the consequences of this but the area is clear now and it's wharf and recreational areas attract a lot of visitors. Rabbit Island apparently has a beautiful beach and many picnic areas and cycle tracks but dogs are prohibited so I have not actually visited it.
Almost outside the door is the Titoki Reserve with a path that winds uphill to offer magnificent views of Nelson 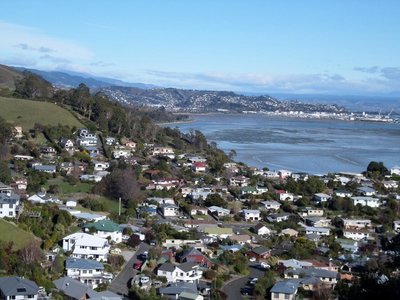 and from the centre of the city it is possible to follow the Maitai River for miles along its gloriously picturesque bank. 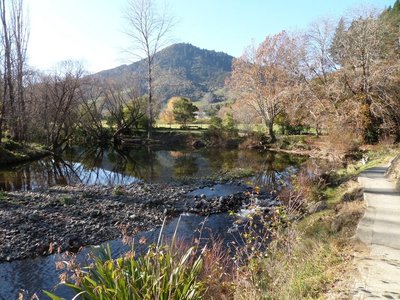 I have enjoyed the walk up to the centre of NZ several more times and usually managed to find a different route down so taking in even more of the scenery. 2 kms away is the Wakapuaka Reserve an ornithologists dream come true and home to many species of water birds and a flock of beautiful black swans. 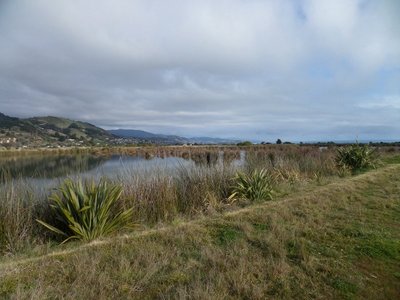 I think this entire area is possibly the most perfect that I have ever been to.
As well as countryside walking the dogs and I spend a lot of time on the fabulous 'dog beach' where they can really 'socialise' and I can saunter along searching for shells and curiously shaped pieces of driftwood. 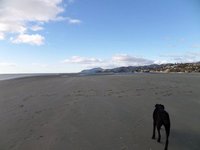 The animals at this house sit have been lovely to look after they are very obedient and affectionate and a lot of fun. We had a bit of a drama with Drake who managed to find a piece of wire (who knows where or how?) that gave him a pretty big skin tear on his leg. A visit to the vet, 8 stitches and a $400+ bill later put paid to our beach visits for the last two weeks but he was an amazing patient and didn't mess with it at all so it has healed really well and we should be able to restart our beach romps on Monday.
The day following this I 'lost' Lilli from the garden and just when I thought I was going to have to tramp the neighbourhood I saw her on the lawn with a big black hairy thing at her feet. It turned out to be a dead guinea pig! I don't know whether she found it in that condition or despatched it herself but it was not a pleasant task to get rid of it. Thankfully I haven't heard any of the neighbours children calling out for their lost pet.
I paid a visit to 'Founders Heritage Park' an outdoor museum with both original and historical replica buildings from the area and spent a very pleasant couple of hours wandering around there. It has a particularly good Maritime Museum with hundreds of skilfully constructed models and ships in bottles. 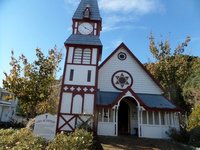 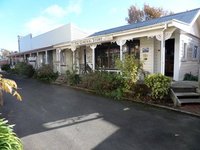 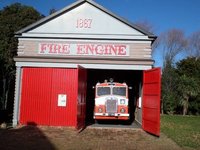 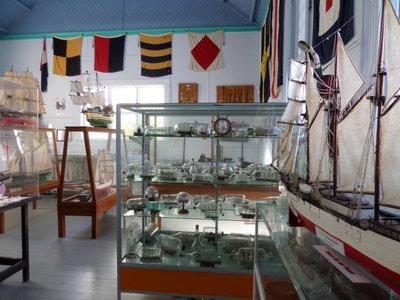 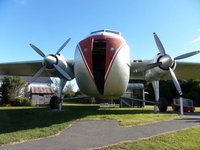 Apart from all the walking my friend Mandy and I have been to blues and jazz evenings at a local venue and shared several meals together and I have become friendly with one of my neighbours Ruth. Ruth is an English woman who has been here for fifteen years but keeps her house in Petworth "just in case". She took me to a fundraising quiz night in aid of the ARK (dogs charity) and introduced me to some of her friends and we have continued to socialise together. Mandy and I will be enjoying supper and scrabble at Ruth's house on Monday evening.
I visit the library frequently and make good use of both their books and DVD rentals and I've knitted three beanies, a five foot long snood and a jumper so far.
Simple pleasures, perfect days. What more can I say?