A return to NZ - Christchurch, Kaikoura, Renwick and Nelson 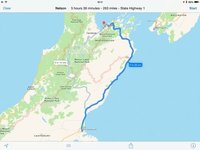 After spending a lovely couple of weeks with T+B in Cronulla I flew back to NZ on 23rd May for a few days of exploring before my two and a half month house sit in Nelson. I arrived in Christchurch at 11pm and managed to get the last bus into the city for a one night stay in the YHA hostel before heading northwards towards Nelson. I wanted to see how much Christchurch had changed since my visit last year and although the rubble has mostly been cleared and construction is going on the whole atmosphere of the city felt very 'flat' to me. I spoke at length to a couple of residents who had the same message, they were very appreciative of how fortunate the city had been by comparison with other earthquake hit zones around the world, but four years on there is a feeling of despondency and frustration with the speed of re-generation. Of course it must have taken a very long time to inspect, clear and make safe and to repair the basics of infrastructure but nonetheless many residents are still living in leaky damaged homes. The container mall has grown and everywhere small fast food cabins offering international cuisine have sprung up and murals and plantings definitely enhance the CBD. 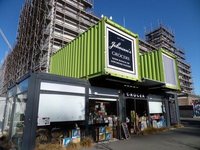 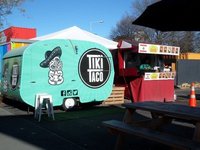 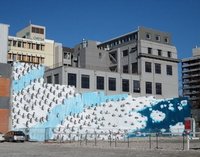 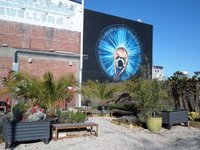 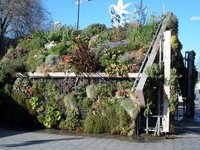 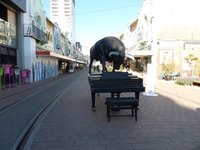 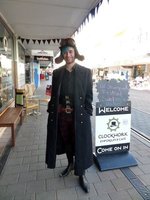 but overall the optimism and determination that I experienced last year was missing. There is major row going on about the cathedral between those who would like to 'graft' a sympathetic new design onto what is left of the historic building and those who insist that it should be rebuilt in it's original form. Meanwhile the ruin of this iconic building sits sadly in the centre of what was called 'The Garden City' although there is not much evidence of this beauty now. 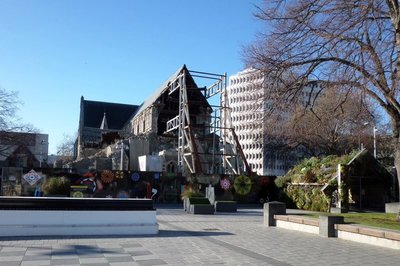 Most predictions are that it will take another ten years to get this city back into shape and meanwhile the alcoholism and depression rates of residents continue to rise. I had felt inspired by the possibilities for the future of Christchurch during my visit last February but I was glad to leave it behind this time. 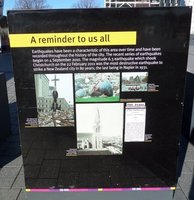 I caught the late afternoon Intercity bus to Kaikoura, which is famous for whale watching, and arrived at 6.30pm in the dark and with rain lashing down so I was not able to see the view from the YHA hostel until the next morning. When I did I amazed. The, very good, hostel is located at one end of the bay and has views across to the snow capped mountains beyond. 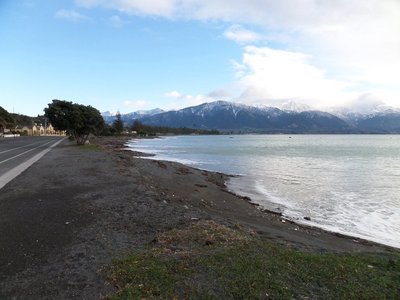 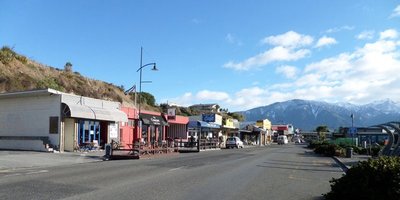 I made the most of my one day in this spectacularly beautiful place with a walk along the coast into the small town itself in the morning and then a three hour walk around the peninsula in the afternoon. The peninsula walk passes two seal colonies and these beautiful marine mammals are obviously used to plenty of human company because they bask in the sun right alongside the walkway and even on the boardwalk itself. 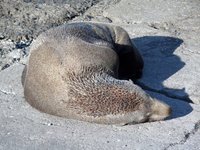 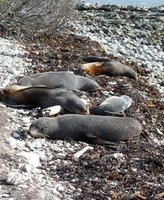 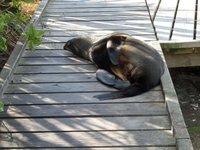 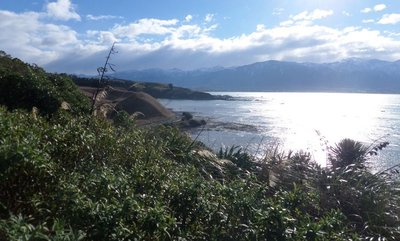 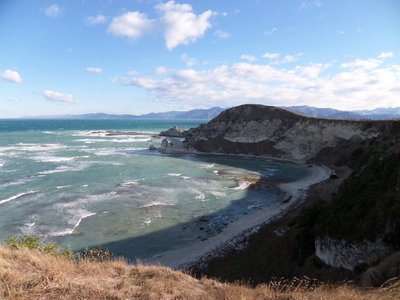 The cliff top views along the walk around to South Bay are stunning and then a half hour walk across the headland takes you back into Kaikoura town. I caught up with three other women on this last stretch and we made our way into the town together and spent a pleasant hour exchanging travel stories over delicious fish and chips.
I had two nights in Kaikoura (and could certainly have spent longer there) then caught the morning Intercity bus to Renwick in the centre of the Marlborough wine growing region. My accommodation there turned out to be a real bonus. I had booked to share a dorm room in the only backpackers lodge in the tiny town but when I arrived there were only four residents, including me, in the eight bedroomed place so I was given a double room with a king sized bed, crisp white sheets, fluffy white towels and a tv. All this at no extra cost so, for the equivalent of £15 per night, this was probably the best bargain of my travels so far this year. Watsons Bay Backpackers deserves every one of its excellent reviews and the owners, Paul and Pat were so welcoming and friendly. It is such a pity because they really feel the need to retire and the place is on the market but so far there have been no takers. If it closes as a backpackers it will be a great loss to travellers and probably to the local community. I had intended to hire a bike from the hostel to do a wine tour but because it is so centrally located and there are lots of small wineries right next door to each other I was able to visit them on foot. After a few hours walking and complimentary tastings at seven wineries I was very pleased not to be in charge of any vehicle!
Arriving in Nelson on 28th May I had one night with the homeowners before they headed off to Germany and I have now settled into a comfortable routine with the animals, two dogs and a cat. The dogs, lab/mastin cross (Drake) and Jack Russell (Lily) are very obedient and affectionate and we are having a lot of fun together and Tommy the cat stays mostly outside so he is no problem at all.

Unfortunately Drake has arthritic hips so cannot do the long walks I was hoping for although I'm sure that Lily would keep going all day. They get two half hour walks plus an afternoon run on the beach each day and are used to being left in their kennel/run for a few hours at a time so I am able to get some serious walking and exploring in by myself.

The house is very comfortable and although there is no heating except in the living room there is a big wood burning stove and a woodshed full of lovely logs. Once I get this going it is possible to keep all the areas that I am using warm and it is so cosy to curl up on the sofa with a good book especially when it is raining. Although the weather has been very changeable it is also very mild considering it is winter here and some days I am walking in just a t-shirt. The homeowner left me the use of her library card, her bike and her car so I am perfectly comfortable and occupied. Nelson town itself is 5kms away and there is a cycle path right into it from outside the front door. I haven't used the bike yet but have walked it several times. The 'dog beach' is not safe for swimming so it is literally like a dogs playground and a great place for them to be off lead and 'socialise' although it is 10km away so I have to drive them there. We have Wakapuaka Cemetery a half hour walk along the cycle path and many dog owners use this as the paths wind their way up a hillside covered in trees that are full of birdsong. It is a beautifully serene place to meander through and at each turn of the loop there are brilliant views of Nelson Haven. 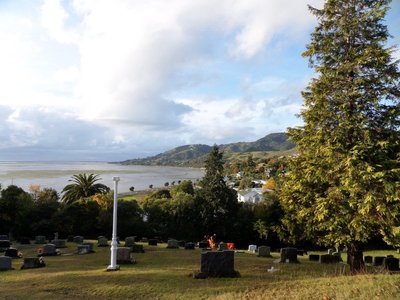 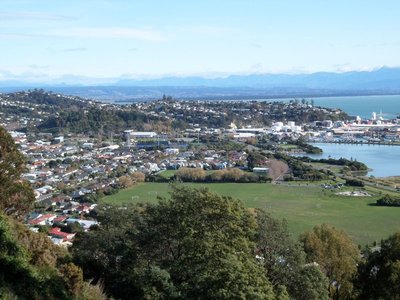 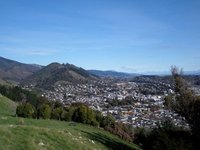 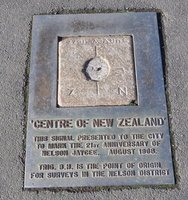 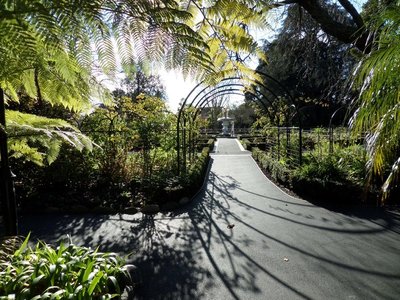 into the almost deserted town (not many shops open on Sundays). I had time for a beer at the totally deserted 'Freehouse' pub 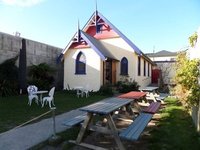 before heading back in a big loop to the house and a trip to the beach with the dogs.
Before I arrived here I joined a group called 'Active Nelson' which has 230+ members any of whom can register an activity on the website so there are plenty of things going on each week. They held their monthly meeting in 'The Freehouse' last Thursday and there were about 20 people there in a truly international gathering. I exchanged 'phone no.s with another English woman who has lived in NZ for 6 years but only just arrived in Nelson and lives about 15mins walk from where I am staying. She runs a mobile hairdressing service and came here on Monday to give me a cut and colour. We shared a bottle of wine and good company and tonight I am visiting her for dinner. It might be safer to walk!
I spent about three nights in Nelson last year and remember writing in this blog 'this is a town I could live in'. My stay here so far has completely re-iterated that thought and I am not surprised that so many people have come here for six moths and ended up staying for life. I am so glad I have another two months here.