Well my last week in SE Queensland was fairly eventful. I managed to get into the city again for one last visit, we had a tropical storm that kept me pretty much housebound for two days, and I finally got to explore some of the Gold Coast.
My final day in the city was spent in search of Newstead House, the oldest surviving residence in Brisbane, and despite having my map it turned into a bit of a mystery tour. This was mostly due to my own ineptitude, but my error came with compensations. I took the City Cat down river to New Farm, the wrong stop, which left me with a 3 mile hike although I didn't realise this at the time. 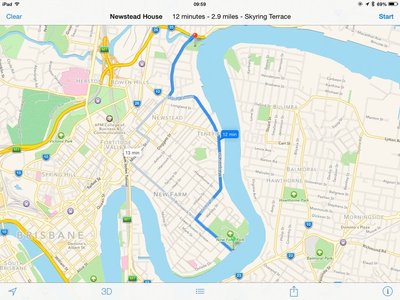 So I set off along the river walk in the general direction and almost tripped over the Powerhouse. This building, constructed in stages between 1926 and 1940, supplied electricity to the tramway system and several suburbs of the city. It was decommissioned in 1971 and left to become derelict until the city council redeveloped it and opened it as an Arts Centre in 2000. That redevelopment did not include 'beautifying' it and both the exterior and interior are still covered in the graffiti acquired during the intervening years and this gives it a cutting edge urban feel. 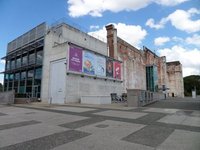 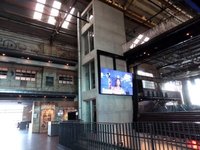 It sits right alongside the river and has bars and terraces where you can enjoy a meal/drink overlooking some impressive views. It also houses two theatres, seating 625 people between them and lots of other creative spaces. I'm sure it woud be an amazing place to attend a band concert or theatrical performance and one that I could see Steve and Michelle visiting a lot if they lived here.
Walking on I thought I might as well try to find the old Gasworks which has also been redeveloped into a plaza of offices, shops, restaurants and an outdoor art venue. On my way to this another accidental discovery put me inside the Commerial Road Antique Centre for a blissful hour of browsing and a small purchase.
After a look around Gasworks Plaza I followed directions back to the river and found myself on a stretch of path designated as a heritage walk to commemorate submariners. Brisbane was the Pacific base for submarines during WW2 and there are plaques detailing the various fleets and boats operating from there. 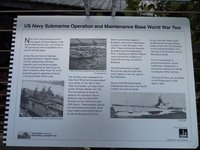 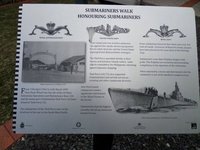 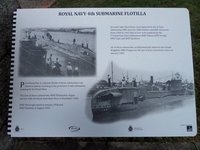 This particular stretch is also very beautiful because the garden walls of the apartment buildings overlooking the river are absolutely covered in bougainvillea of all colours. In amongst the new builds are many historical warehouses which have been redeveloped and a quirky homage to the significance of wool trade. 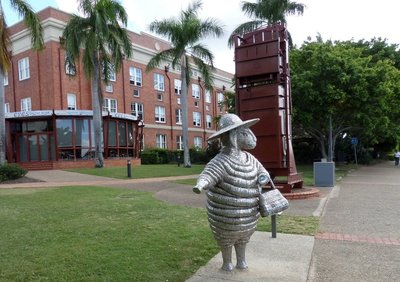 I finally found Newstead House and it was well worth the hike. Originally built as a two storey brick and stone house in 1846 it was extended between 1865 and 1867 into the house that can be seen today. The ground floor of the first house was made into a basement during the extension and the 'footprint' of this first residence, along with a couple of actual rooms, is incorporated into the museum below ground level. The house is furnished in period and the balconies have river views. 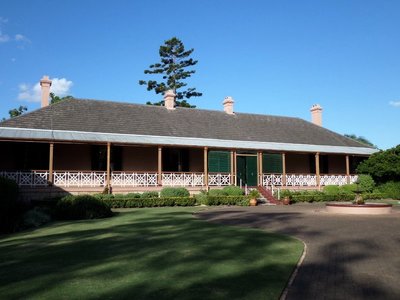 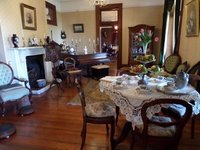 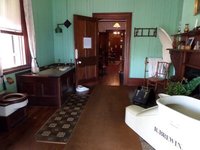 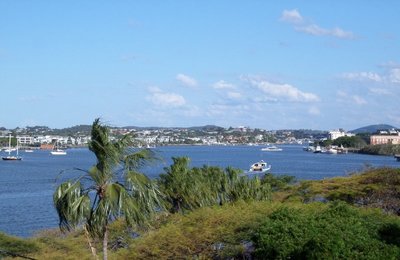 The following day I went to Redcliffe, a rather faded seaside resort, that was Queensland's first colony in 1864 and more recently home to the young BeeGees. There is a memorial to them, designated 'BeeGees Way' that is little more than an alley with lots of pictures on the walls but it was officially opened by Barry Gibb and I believe there are plans to upgrade it. 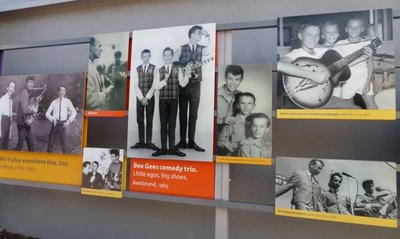 Later that week an east coast 'trop' overtook us and everyone was warned to stay inside unless travel was absolutely necessary. Highway bridges that would normally stand well above the creeks were flooded and, in places, 380 mm of rain was dumped within a few hours. The weather forecasts had been uncannily accurate so thankfully there was plenty of warning and time for people to prepare. Sadly a few lives were lost due to people trying to drive through flood waters, despite emphatic advice against it, and their cars being washed off bridges etc. Fortunately nothing came into the house so my biggest problem was trying to calm Tashi who was absolutely terrified by the lightning and thunder that were exploding over us. I built him a cocoon of cushions on the sofa next to me and that seemed to stop his shaking. When I took him for walk after it had all blown over the path at the back of us was strewn with debris, the 3metre high fencing had water line rubbish sticking through it to half it's height and the swimming pool was full of brown water.
My visit to the Gold Coast was very easy, again using the train and bus, and a tram that runs the length of the beaches. It has been described as 'the hedonistic playground of the rich and famous' and compared to Los Angeles. Location for the Palazzo Versace, where a Superior Double (there don't seem to be any 'standard' rooms) including buffet breakfast will cost you upwards of $490 per night (deal price) and a Lagoon Suite $917, the majority of the coastline is populated with high rise hotels and apartments. 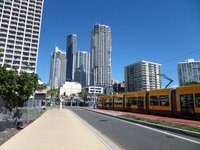 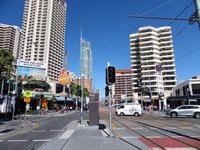 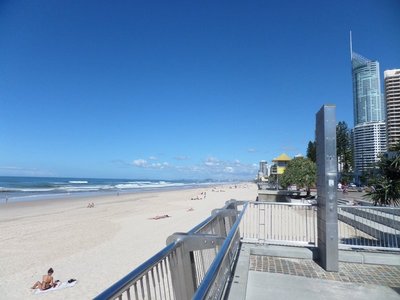 Unlike the Sunshine Coast, where sun and nature are the selling points, this coast is all about white sandy beaches littered with bronze, beautiful bodies barbecuing themselves during the day and partying at night. If you want action then this is the place to be and if you are a celebrity watcher you could easily find yourself on the next dining table to one or more of them. Surfers Paradise is famous and is exactly what you woud expect it to be but the bottom end of the coastline, between Currumbin and Tweed Heads, is more residential and has a much more relaxed feel to it. Tweed Heads is is located on the border of NSW which operates 'daylight savings' and it's twin town of Coolangatta is located on the border of QLD, the only state in the country that doesn't, so you can literally cross the street and be in a different time zone. I have no idea how this affects businesses, schools etc but I'm sure there are some people who are happy to be able to celebrate New Year twice within an hour.
I thoroughly enjoyed my stay in SE QLD and would definitely go back to Brisbane, which really does have so much to offer, and to explore the inland region with its mountains and waterfalls. I found the people to be exceptionally friendly and welcoming and encountered the kind of polite behaviour that seems almost anachronistic in this day and age.
I flew back to Sydney on 6th May and Becky and I went to a performance at the Sydney Opera House that evening. Regrettably it was absolutely the worst two hours I have forced myself to endure in a very long time. Leonard Bernstein's Mass has been described by one critic as 'irredemably mediocre' I would describe it as irredemably appalling. Chosen by the Conservatorium of Music to celebrate it's 100th anniversary the only reason I can think of for this choice is that they wanted a one off performance that would allow for the entire student body to be on stage at the same time. With over 400 performers, including an orchestra, dancers, choirs and soloists, I had assumed that it would include something for everyone. I'll tell you what happens when you don't do your research properly you get stuck in the centre of a long row with no easy exit feeling that surely it can only get better and desperately hoping for an intermission so that you can leave. It didn't get better and there was no intermission! Fortunately the tickets were not priced at the usual Opera House rates which is just as well because the only interesting thing was the interior of the auditorium. I normally read lots of reviews before I book anything anywhere. Clearly I had a senior moment with that one!